John’s Sacrifice in the Shadow of 9/11

John’s Sacrifice in the Shadow of 9/11

John’s mother Sandy was watching the news early on 9-11 when the first plane hit. She tried to call him. John’s unit had been in the field on maneuvers until very late 10 September 2001. By the time John turned in his gear and weapons, it was 0400 or so on on 9-11. So when his mother called, he was sleeping. He finally picked up, cranky for having been awakened. His mother told him to turn on the TV. He asked her what station. She told him it didn’t matter. He turned on the TV just as the 2nd aircraft hit the Towers. He quickly said: “Mom, I’ve got to go.” She asked him to wait, and he said: No, I mean it, I’ve got to go NOW.” Unbeknownst to us, John’s Ranger battalion (3d Battalion at Ft. Benning) was the “on call” Ranger battalion on alert for immediate deployment. We did not see John until we saw the Rangers jump onto Kandahar Airfield on 20 October 2001. We had a pretty good idea that John was amongst them. In reality, he was the 5th guy out of the 3d aircraft in the famous night vision CNN tape played many times after October 20. He wasn’t even 19 yet. 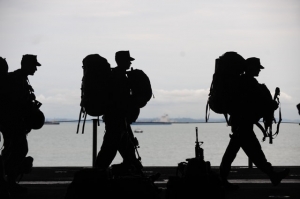 John sacrificed for his country. He fought against wrongs. Now, he sits in prison counting the days, no the years, he has to wait until he can see his daughters again.

How is this right? How is this fair? How can an innocent soldier, father, and American citizen be so mistreated by the country he risked his life to defend?

If you believe in John please click this link and see how 2 minutes of your time can help send an innocent man home to his family.

About the Author: Admin

We Can Deliver On Projects